There was some debate a while back on KineJapan, the worldwide listserv for discussion of Japanese moving image media to which I subscribe, about the accuracy of the translation of the title of Yoshida Daihachi’s Permanent Nobara.  The consensus, as far as I can remember, was that ‘Permanent Nobara’ was indeed the best translation, given that the original title in Japanese was パーマネントのばら, which indicates an intentional Japanization of the English word ‘permanent’, and of course is the actual name of the salon around which the lives of the film’s characters is centered.  As someone on KineJapan pointed out, this translation (and its original) allow for ambiguity in the meaning of the title, and having now seen the film this afternoon for myself, I would throw in my vote for the intentional-ambiguity camp.  (As a side note, speaking of translation, I’m very much stoked to be attending a subtitling lecture and workshop called “Translating Culture and Context” tomorrow evening with Taro Goto, one of the leading Japanese-English interpreters and subtitlers in the world!) 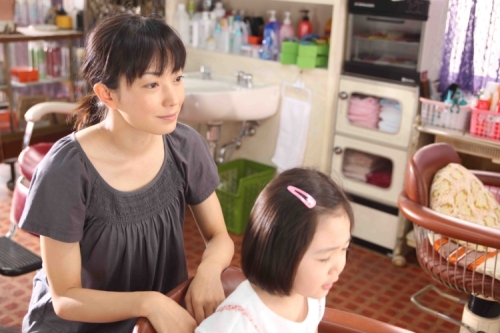 Naoko and her daughter Momo move back in with Naoko's mother, living in the same building as the Permanent Nobara hair salon.

So, to what does the ‘permanent’ in the title of Yoshida’s film refer?  Literally, to the tightly coiled hairdos with which protagonist Naoko’s mother coifs the fishing village’s ladies, and to the name of her hair salon.  Figuratively, to the tensely balanced ideas of forgetting and remaining, of change and stasis that underlie the themes of the film.  And ‘nobara’?  The name of hairstyling mother, and her salon, but if the title is read as ‘Paamanento no bara’, it can translate to something more ambiguous like “the rose of permanence”.  To my Western mind (and potentially to the globalizing Japanese filmmaking community and audiences) this invokes Shakespeare; this invokes Gertrude Stein.  “A rose by any other name would smell as sweet.”  “A rose is a rose is a rose is a rose.”  The title, then, is the key with which to unlock the meaning of this painfully hilarious yet hauntingly beautiful film, the aporia from which to unravel, deconstructively, the complexity of meaning that fills its frames.

Before I get carried away on a train driven by Jacques Derrida and conducted by J. Hillis Miller, for those of you who dislike post-modernism (although if you’ve made it this far as a reader of my blog, you probably aren’t allergic to it) and are simply interested in how the film was, let me highlight some of the most salient brilliances of Permament Nobara.  It tells the story of Naoko’s return, in the wake of divorce, to her mother’s home with her young daughter, interweaving her own story with the lives of her childhood friends and the women who frequent her mother’s salon.  Think Steel Magnoliasuprooted and replanted in a rural contemporary Japanese fishing village, with a touch of the prodigal son (turned daughter), then given free reign of the diegetic world outside of the hair salon, and free reign of the complex emotions of being human — you get a masterpiece running the entire emotional gamut, from shocked horror to gut-splitting laughter to the tears that were, to completely fail in avoiding the use of clichés, welling in my eyes by the end of the movie.  The film is incredibly well-scripted, and shot with the steady, long takes that both mark it as classically Japanese and recall the idea of permanence that is immediately introduced in the title.  It is also incredibly well-acted, and the ensemble cast of actresses builds a bastion of strong women who persist beyond the varying impermanences of the men in their lives, who find powerful strength in their bonds with one another but also in their individuality.   Coming from a national cinema that has traditionally reflected a less-than-feminist-friendly attitude and arguably oppressive status of gender roles in Japan, this is a refreshing and hope-inspiring piece to see on that front as well. 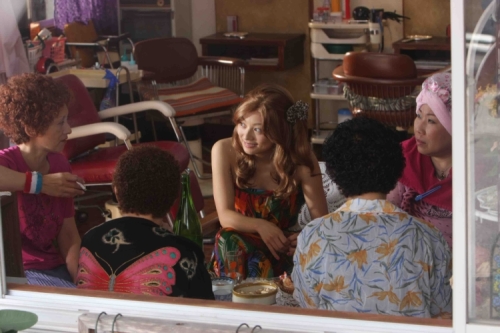 Naoko's childhood friend Mi-chan (center) shares shochu and small-talk with the older generation at the salon.

I couldn’t find a trailer with subtitles, but you can get a sense of the emotional quality of the film even without words, because the acting speaks volumes:

The analysis that this film deserves is beyond the scope of this post, mostly because I have been up for about 17 hours of train travel and film festing, but I promise to deconstruct it at my soonest available convenience. 🙂

My Personal Ratings for the film…